As we near the end of the Think Tank Initiative (TTI), one of the things we are asking ourselves is how we can apply TTI lessons beyond organizational support to the broader ecosystems of evidence production and use. In this vein, TTI was pleased to sponsor the third edition of la Semana de la Evidencia (“Evidence Week”) this year, which took place from October 22-26, 2018. La Semana de la Evidencia is a festival of events that aims to promote the use of evidence in the development of, and dialogue around, public policies in Latin America.

In this piece, I provide an overview of my personal reflections on la Semana de la Evidencia from my time as both a host and participant at the events, including important themes that emerged, and lessons we can take from these types of events.

Growing demand for discussions around evidence

There is clearly a demand for these types of events, as la Semana de la Evidencia has grown impressively since its inception in 2016.  Engagement has tripled to over 3,000 participants in 2018, including a regional expansion from events in Peru to events all across Latin America (and even beyond). During our session, a panelist even lamented that there were too many interesting events, and not enough time to attend them all. Events like these are excellent for sharing information and help to create new – and leverage existing – social connections among researchers and policy makers.

On the accessibility of research in Peru

TTI’s session on “research accessibility for policymaking in Peru” built on a research project that I conducted with Gabriela Ho in 2016. Gabriela, who is currently Territorial Coordination Specialist at the Ministry of Culture at the Government of Peru, and I were joined by panelists Javier Portocarrero, Executive Director at the Consorcio de Investigacion Economica y Social (CIES), Carlos Eduardo Aramburu, Professor at the Pontificia Universidad Catolica del Peru, and Jimmy Carrillo, Director of Communications at the Sociedad Peruana de Derecho Ambiental (SPDA). The panel therefore represented perspectives from research, communications, civil service, and the nexus between research and policymaking. This led to very rich discussions on aspects of research accessibility in the Peruvian context based on everyone’s diverse experiences. Using the concept of research accessibility to help frame the discussions around the physical, intellectual and social dimensions of accessibility, we engaged with the panelists around topics such as the barriers to research accessibility and use, the importance of social capital, and the impact of the changing political context.

Many of the issues that were discussed in our session align with the themes that emerged during our research  two years ago, for instance around the importance of how research is communicated,  and that social networks and reputation play an important role in knowledge exchange in the Peruvian context. Lack of continuity in government was raised as one important barrier (for example changing ministers or staff with political cycles) with particular relevance as there has been a lot of political change over the past two years in Peru. This has been in part due to recent corruption scandals and the resignation of the president earlier this year after less than two years in office. The topic of corruption was an important one in Peru, and was in fact seen across several events addressing this theme during the week.

Comedy as a tool for sharing information

The different events that I attended all utilized different formats and styles. This again highlighted the importance that how we understand information is often related to how it is shared and represented. For instance, the opening plenary on corruption began with a comedic skit educating the audience on how to become a corrupt politician. This had everyone in the audience bent over with laughter while also addressing this important and difficult topic. More importantly, it is also the part of the presentation that I remember the best. I later remarked with one of the organizers about how great this opening was – and we reflected how comedy is something that is not often used in academia but is such a powerful way of communicating with audiences. Something to keep in mind for future events!

Increasing recognition of the importance of gender

Certain themes emerged as timely and important during the week. In addition to themes of corruption, gender was a prevalent topic this year. This was in large part thanks to the presence of Grupo Sofia, a TTI-supported network that promotes the work of women social scientists and seeks to make their research visible and accessible across the academic community. They have developed products such as the “Gender Toolkit” to ensure that more women have the opportunity disseminate their research at academic events and in the media. During the week, Grupo Sofia hosted an event on their newest research, and also won a Premio Poder award in light of their efforts. Gender was also the topic of the opening reception where panellists from different sectors spoke to issues of gender gaps and gender-based violence in the Peruvian context.

Policy research organizations (think tanks) can play a valuable role in the production and uptake of research in decision-making processes. Yet other elements beyond these organizations – what we often refer to as the ‘context’ – are also important to how information is produced and used. Engaging with actors in this broader ecosystem – such as policymakers, the private sector, civil society – is important to help facilitate a culture of evidence use and uptake. Strong organizations and high quality research are definitely important factors in the pursuit of research uptake, but they are still only a part of it. Events such as la Semana de la Evidencia are an important way to engage with this broader community, and help promote dialogue between researchers and policymakers. In this way they can even help facilitate greater accessibility – and ultimately use - of research. 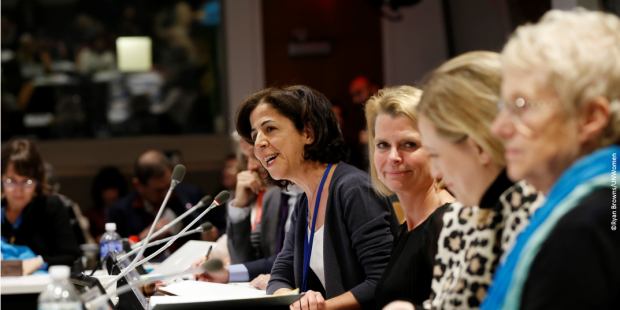 Using research to promote gender equality
This post is the second in a blog series on think tanks and gender equality.
Latin American Regional Conference
The Latin American Initiative for Public Policy Research (ILAIPP) will be hosting their second regional conference from April 5-6, 2016....
Remembering the Final Think Tank Initiative Exchange
In this blog, Tiffany Barnes-Huggins reflects back on the 3rd and final TTI Exchange that took place in Bangkok, Thailand, in November 2018.
Capacity Building for Think Tanks in South Asia
Over 113 South Asian researchers concluded a two-year Capacity Building program under the Think Tank Initiative (TTI). The program was...