[Editor’s note: This post was originally published by On Think Tanks as part of a series on Women in Think Tanks edited by Meghan Froehner. It was written by Priyanthi Fernando, international development consultant and former Executive Director of the Centre for Poverty Analysis, in Sri Lanka.]

Groundwork for thinking about think tanks and gender

In thinking about issues around women in think tanks, the first step I took was to try and understand what type of organisation a think tank is. Most modern day organisations, especially those in the corporate world, are gendered organisations. This means that in these organisations the patterns of advantage and disadvantage, leadership and control, meaning and identity, and differential valuing of rationality and emotion, are formed in terms of the binary relationship between women and men. A discussion of women’s participation and ascension to leadership roles in think tanks, questions on gendered ways of thinking and discourse, paths to careers and gender divide in issue areas – all assume that think thanks are also gendered organisations, and that somehow women led think tanks could behave differently, and that there are organisational practices that might ‘relieve some of the barriers to inclusion and promotion that women face in think tanks.’ For me, the responses to these questions are, indeed, contingent on the organisational nature of the think tank and the degree to which its structure and organisational processes are gendered. I cannot obviously speak for all think tanks, or even a sub-group of them, but I would like to share my own experiences of working and leading a think tank for ten years.

I might add before I proceed that there are three dimensions that also need to be factored into the concept of a gendered organisation.

I am afraid the first two are beyond my own experience, and would require some research. In this post, I will expand on the third.

Gendering of the workplace and workers

Joan Acker, one of the earliest writers on the gendered organisation, and others who have built on her writing, argue that the basis for a gendered organisation lies in the conceptualisation of ‘jobs’. A ‘job’ presumes the existence of a ‘worker’ who puts the job and the organisation above all other commitments. While organisational theory does not engender this worker, the inherent presumption is that there will be someone else outside of the ‘job’ who will take on the family’s household responsibilities, including care for children and the elderly. In practice, the concept of a ‘job’ mirrors the gender division of labour that exists in most societies and supports the idea of male breadwinner/female care-giver.

This idea is reinforced by gendered expectations and working norms, often formalized into performance assessments. Traditionally ‘male’ characteristics such as rationality, critical thinking, aggressiveness and dedication to paid work gain currency and are rewarded, creating a ‘masculine ethic’ within the organisation which devalues the traditional feminine characteristics of nurturing, care-giving and emotionality. Some analysts also talk about the ‘heroic individualism’ in organisations where the organisational culture glorifies employees that work as if they had no personal life, needs or responsibilities, work all hours to meet deadlines, silence personal concerns and refuse to recognise or admit the costs of overwork. The literature also suggests that women who have achieved positions of power in these organisations have assumed the persona of ‘socially functioning men’.

Experiences at the Centre for Poverty Analysis in Sri Lanka

While none of the literature that I have come across applies to social policy research institutes or think tanks (obviously a potential area for study) I am sure the above discussion will ring bells for many of us in the think tank community. Even the military connotations implicit in the term ‘think tank’ has a masculine feel to it! At the Centre for Poverty Analysis (CEPA), Sri Lanka where I was the Executive Director from 2005-2015, I believe we, albeit rather unwittingly, tried to dismantle some of the characteristics of a gendered organisation, and tried to create a more equitable working space for women and men.

The separation of the public and private sphere via the demands of the ‘job’ as described above has been eroded at CEPA, as it has in other organisations because of the use of technology, the ability for researchers to ‘work from home’, and the accommodation of part-time work. At CEPA, the profile of the staff, while still predominantly women (I will come to that later) has shifted from an earlier demographic of unmarried or childless workers, to women (and men) with young families. ‘Heroism’ is no longer demonstrated by working long hours in the office, though it has been replaced in some instances somewhat less visibly, by working long hours at home. Assessments of staff commitment are not made, either formally or informally, by the quantity of time spent, but increasingly on the quality of work that is produced and on contributions to team effort. The demands of family responsibilities are recognized for both women and men. Two of CEPA’s senior male researchers also work from home when there are demands of child care. Researchers still have to balance the demands of their care responsibilities with being away on field work or at networking events in-country and outside, but this is somewhat facilitated by the existence of extended family and affordable child care support in the country.

The blurring of the public work space, and the private nurturing and care space, is to some extent reinforced by the internal culture of the think tank. CEPA’s centre is its kitchen, where two women cooks have been providing tea and lunches to staff since the organisation’s inception. All the staff eat lunch together without any hierarchical division, and the women cooks play a more than cooking role in supporting the physical well-being of all staff – providing herbal medication if required, or cooking special dishes if needed. The ‘caring’ inherent in this central function, permeates relationships within the organisation, where mentoring and team work is encouraged, and staff members fill in for others if and when the need arises.

I would argue that in CEPA, where stereotypical gender roles are blurred and the job/care dichotomy is managed through a concern for feasible work-life balance, women will find it less of a challenge to take on leadership roles. During my tenure the Senior Management Team that managed the organisation comprised three women and two men. With the restructuring and the new (male) Executive Director, there are likely to be four women and three men in the senior management.

The majority of researchers at CEPA are women and this was a cause of embarrassment for many years and stimulated job advertisements that carried a line saying ‘men are encouraged to apply’. There is a critical mass of men now (9) in a staff strength of 30! This number could well increase as CEPA’s work expands. However, I think a strong female presence could be a characteristic of policy research institutes in Sri Lanka (would need to do a research to confirm this). In Sri Lanka, women outnumber men in all the faculties of the Universities, except in Engineering and IT and Computer science.

While this in itself is telling, it probably hides some of the gendered hierarchies within disciplines (e.g. economics).   I see that an organisation like CEPA with its focus on the social sciences, and its reputation for being strong in micro-studies and qualitative research, maybe more attractive to women who are by far the larger majority of social scientists in Sri Lanka, have an interest in flexible working conditions and are stimulated by working ‘with people’.

By this I am implying that there could be a difference between men and women researchers, with the latter preferring the ‘softer’ aspects of qualitative research and talking to ordinary people, than men (who prefer the more technical approach of quantitative, number crunching exercises).

In CEPA in the past, qualitative, primary field research was privileged over and above everything else, and still is to some extent even though the quantitative has received some ascendancy in recent years. However, somewhat contrarily to my hypothesis of the gender differences in preference for quantitative and qualitative research, the quantitative research activities at CEPA are also largely run by women; as is its accounts department. Despite the lower participation of women in IT and Computer science education, much of the organisation’s online presence is also run by a team of young women, where it would seem that age, rather than gender is the defining characteristic.

I must mention here that the ‘value’ that is attached to certain types of knowledge, and their attractiveness to women or men, may also vary with time. My first job as a young graduate was also with a think tank, probably Sri Lanka’s first. At that time almost four decades ago, the staff of that organisation was predominantly male – and this included the whole team that carried out social anthropological primary research in the field.   Almost none of the few women researchers did any primary field research.

There is also an issue of hierarchy of jobs, well exemplified in the all-women accounts department. Accountancy jobs in the corporate sector are highly remunerated and carry considerable additional benefits (e.g. a company car). CEPA has never been able to retain male accountants, partly I am sure, for the reason that the think tank does not provide similar benefits. I am assuming that the social science jobs are also somewhat hierarchically organised – and that hard core economists for instance will look to other opportunities (e.g. the Central Bank of Sri Lanka and other think tanks focusing on economic analyses) for employment. Where these organisations are highly gendered, women may have a very different experience.

Further research on women and gender in think tanks needed

My personal experience and the absence of any formal research, limits my ability to comment further on the issues of different genders, or pluralistic social groupings (e.g. ethnicity, religion) or knowledge hierarchies, but I am sure these dynamics will intersect with each other to facilitate/constrain the participation in think tanks. I believe the complexity of these intersections could be the focus of a fascinating programme of research. 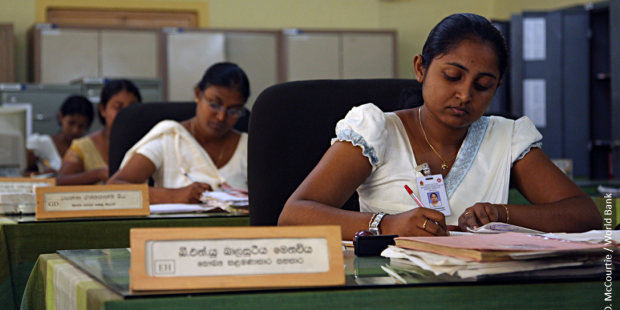 Consolidating themes and identifying strategies for change: next steps in supporting women in think tanks
In a summary of the Women in Think Tanks series, Meghan Froehner reflects on common themes from contributors and proposes ideas for further...
Female Leadership at Think Tanks
International Women’s Day is a time to celebrate the achievements of women - socially, economically, culturally, and politically – and to...
Participatory Engagement in a Small Think Tank
In the third post in this series, Roshni Alles of CEPA shares the challenges of participatory approaches to effecting change within an...
Why intersectionality matters for think tanks: Reflections from PAC
In this blog post, Varsha Pillai reflects on discussions she had on intersectionality with funders and think tanks in the Think Tank...