Engendering change in "research as usual"

In this blog, we share our contribution towards “engendering” gender equality into urban planning agendas, and reflect on how the process of learning through this research has also changed how we engage with gender in the work that we do.

[Editor’s Note:The author is a Senior Research Scientist at the Center for Study of Science, Technology and Policy (CSTEP), and is based in Bangalore, India. She is an Urban Planner by training and her research interests primarily include urban sustainability issues and decision support systems for cities. This is the fifth post in a blog series on think tanks and gender equality, edited by Shannon Sutton and Natalia Yang.]

During the last week of September 2017, a prominent Indian news daily carried an opinion piece on India’s flagship cleanliness and sanitation mission, the Swachh Bharat Mission. The piece was written by the Minister of State in charge of Housing and Urban Affairs. It stated that the programme will be a success because it will have a liberating impact on women in both urban and rural areas.  This is particularly interesting because it is not common for an urban sector programme (outside the direct ambit of ministries such as women’s welfare, education and health) to be so directly linked to gender equality. Rather India’s urban development policies have historically emphasised the ‘Leave No One Behind’ agenda of the Sustainable Development Goals (SDGs) by including the urban poor. In addition, a discourse on the ‘Right to the City for All’ is now emerging in public debates in India.

We at CSTEP have followed the SDG conversations closely, particularly as it pertains to Goal-11 which aims to create sustainable and inclusive cities. In our work we have decided to focus on the intersection of Goal-11 and Goal-5, (gender equality and women’s empowerment) in response to ‘Starting Strong: the first 1000 days of SDGs’.  We also chose to look at Goal-6, which aims to achieve universal access to safe water and sanitation - two important aspects of women’s safety and equality. As an example of how we’re doing this, our research paper ‘Localising Gender Equality Goals through Urban Planning Tools in South Asia’ aims to understand the status of ‘gender’ in urban planning and service delivery practices in four study countries: India, Bangladesh, Nepal and Sri Lanka.

Addressing the gap between gender equality and urban planning

It has been established by researchers that women and men perceive and use spaces differently. This is why it is important to consider different gender perspectives in city planning.  However, very few urban planners have actually looked at the role of gender in urban planning (an exception is this paper by Renu Khosla).This finding was validated during our interviews with urban planners, decision-makers, researchers and representatives from government, the private sector, and academia.  Many believed that the gender agenda would automatically get addressed as quality of life in cities improved.  However, few acknowledged that improving quality of life itself could be an outcome of more gender-inclusive planning.

A major constraint we faced in calculating the status of indicators for Goal 11, 5, and 6 is the lack of gender-disaggregated data. Similar data problems plague formal urban planning exercises. However, even when such data is available through sample surveys, planners often lack an understanding on how to use such data effectively. Therefore, adequate training for planners is essential if gender-disaggregated is to be collected and used.

Furthermore, talking with NGOs was quite insightful, especially when we spoke to those who work on-the-ground enhancing participation from the urban-poor community. However, even successful NGO interventions tended to provide few examples of gender equality, and little evidence of mainstreaming into robust institutional procedures.

What does it mean to build gender-equitable cities?

A second example from our research data shows the impact of male ally-ship to influence change towards greater gender equity in cities. A particularly memorable interview was with a popular female local councillor in India, working to improve walkability conditions in her ward. She revealed that having the support of male members in the family, who hold important political positions, helps her overcome inhibitions and engage with community to improve urban local conditions in a meaningful manner.

Our research suggests a set of priority actions, which ought to be multi-pronged and multi-level. These include:

The most important take-away for us

The most important take-away from the study goes beyond its technical aspects. Through the research, we found that men and women perceive the need for a gender equality agenda in urban planning differently. Male respondents generally think visible improvements are taking place in the sphere of women’s empowerment. They expect stakeholder organisations to be responsible for demanding gender inclusion, rather than seeing it as an issue that needs to be pushed by binding mandates. In contrast, female respondents seem more sensitive to subtle discriminations existing in social and institutional norms and practice. Therefore, they expect more visible reforms for women’s representation in urban planning.

Moving forward, we hope to apply what we have learned to our future research. One way we have started doing this is by adopting a more learned approach to the inclusive city agenda, assessing baseline data and setting future benchmarks around access to infrastructure and technology solutions. A concrete example is an ongoing study that we are leading, to come up with an ‘Intersectionality-Informed Framework for Implementation of Effective Gender Mainstreaming’ in the Water, Sanitation and Hygiene sector across three cities in Andhra Pradesh, India. The objective is to design an evidence-based framework for finding specific entry points and protocols for mainstreaming gender perspectives in sanitation planning, with a focus on capturing the perspectives of the most marginalised among different genders.

Overall, it is an empowering feeling to be able to identify more nuanced ways of addressing sustainability questions, for the ‘Leave No One Behind’ agenda is truly a universal one.

It would never be business as usual anymore 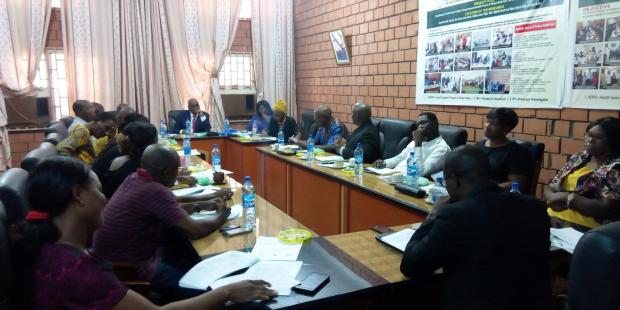