Home » Blog » Can the TTI model be a guide to fund think tanks in India?

Can the TTI model be a guide to fund think tanks in India?

The Think Tank Initiative is a unique example of public funding agencies joining hands with private philanthropic foundations to offer core, non-earmarked and long-term financial support to a cohort of think tanks. Combined with the underlying program ethos that think tanks have institutional ownership of their core grants, and the independence to design their research agenda, the program continues to demonstrate the transformative difference it is making to the supported think tanks, and the ecosystem that they are a part of.

As a key note speaker at the 4th International CSR conference recently hosted by the Institute of Public Enterprise (IPE) at Hyderabad, the key question that I therefore posed to the participants was if this international model could be replicated at national level in India. Could public funding be combined with corporate funding in India in a manner similar to the TTI, suitably adapted to national institutional and political context, such that deserving think tanks could be supported in an effort to nation-building? In a sense, there are two inherent parts of this question. One, why should think tanks be supported, and second, if they should be supported, then what is the best mechanism to do so.

Think tanks as partners of choice

The first question could be answered at several levels. One, as a signatory to the SDGs and Agenda 2030, India needs to pull up its socks quickly to deliver on the profoundly challenging global goals. The data revolution that this will entail has been highlighted by none other than the UN Independent Expert Advisory Group itself in August 2014. However, putting in place institutional capacities to collect data is necessary but not adequate for the purpose. The massive volumes of real time data will need to be analysed not via social media contributions, but through a rigorous process that engages good quality researchers who know the analytical tools and are equally knowledgeable of the contexts. Think tanks provide one important instrument to undertake this mammoth task, and ably.

Second, governments are the largest user of outputs from think tanks, which constantly engages with public policy questions in the short and the medium term, as well as with public authorities to inform policy-making. A recent study by the Institute of Economic Growth (IEG), Delhi published in the edited book on social science research in India in 2017 concludes that there ‘is considerable presence of social science research studies and references in various policy documents of ministries and Five-Year Plans of Planning Commission’. For instance, they found as many as 666 references to social science research cited in 200 key policy documents of three Indian Union Ministries – Ministries of Human Resource Development, Rural Development and Women & Child Development – available on their respective websites.

And yet, the government’s funding of social science research in India is very low. Another study by the Institute of Social and Economic Change (ISEC), Bangalore in the same book shows that total government funding for Social Science Research in 2010-11 – the most recent year for which data is available – from Union and state governments was INR 486 crores (approximately USD 700 million) at current prices. Share of funding for social science research in India’s national budget is 0.025%, and in GDP is 0.0062%. In contrast, for instance, similar share of public funding for science and technology is 0.86% & 0.21% respectively. Third, think tanks in India, with as well as without government support, have significantly influenced the government policies on critical economic, social and technological issues for decades. In fact, India has a long and glorious tradition of using public funding as well as private philanthropic funding to both establish new institutions of research as well as provide core grants to some of the best institutions of excellence that work on public policy research. Leading centres of public policy research and teaching such as Indian Institute of Management, Ahmedabad (IIMA), Tata Institute of Social Sciences (TISS), Indian Institute of Science (IISc), The Energy Research Institute (TERI) and many others have been established with core support. As ‘temples of modern India’, Public Sector Enterprises have had CSR as their core set of institutional objectives laid down by the State for decades since independence, except that their developmental and welfare practices were not called as ‘CSR’ until recently

Fourth, social science research is a public good, and its funding must therefore follow the well-established principles of public support. As public policy research institutions, think tanks, despite uncertain and low doses of project-based funding, have managed to create a niche for themselves in producing good quality research that is required for public policy making in countries, but also globally. They also often come together as networks – Southern Voice being one such network of think tanks from the Global South – to profoundly inform and influence global processes and outcomes of multilateral institutions.

Fifth, unfortunately, for a variety of reasons, public policy research in universities in India has seen a secular decline and is currently at a very low. Part of the reason for this is the divorce of research from teaching that has taken place in India over decades. There is evidence that the universities have a symbiotic relationship with think tanks with the exchange of teachers from universities with researchers from think tanks that is a win-win for both. There are also think tanks – such as IPE, Hyderabad – that combine teaching with research.

A TTI model of funding in India?

For all of the above reasons therefore – and perhaps a few more –, think tanks deserve to be supported and strengthened. And that brings up the question of what is the best mechanism to support them? The potential accusation of a biased response from me notwithstanding, I submit that precisely because of my insider knowledge of the ethos, principles and functioning of TTI, and the transformative changes it is continuing to bring in many think tanks we support, I believe that a TTI model, suitably adapted to national context in India, is one mechanism that has demonstrated successful support. It combines all of the core principles of what has constituted effective and accountable support; long-term and predictable, core and non-earmarked funding; emphasis on institutional ownership enabling independent research agenda; light touch but effective and regular monitoring using innovative tools and in-person contacts; concurrent and external evaluation; dedicated bespoke capacity-building support and mutually agreed and clear set of goals and milestones. To be sure, some leading domestic philanthropists in India, and international agencies – notably Ford Foundation – have indeed provided similar support in the early years of Indian independence, with some of the best institutions today having been created and supported by them initially. However, much of that experience could not be documented and shared in public domain, nor – as gathered from anecdotal information – was the support as systematically designed and implemented as the TTI.

As a public good, social science research should ideally be funded from public resources. However, given the limitation and competing demands on public resources in a developing country such as India, the new national CSR law- applicable to both private and public companies- provides a unique opportunity for a government led public-private partnership, along the lines of TTI framework. As an emerging economy in a multipolar world, could India provide the leadership in supporting knowledge creation for improved public policy making which will eventually help the country and the world to achieve the ethical society that SDGs envisage?

Can policy research institutions help to transform the world?
This post by Peter Taylor, Associate Director for Think Tank Initiatives at Canada’s International Development Research Centre (IDRC),...
Think Tanks and the Global Development Agenda
TTI’s John A. Okidi blogs about think tanks in Uganda, Ethiopia, Tanzania, and Kenya working to popularize the SDGs and to help integrate...
Why focus on the first 1000 days of the Sustainable Development Goals?
The "first 1000 days" of life are critical for a child's future: and the same is true of global agreements such as the Sustainable... 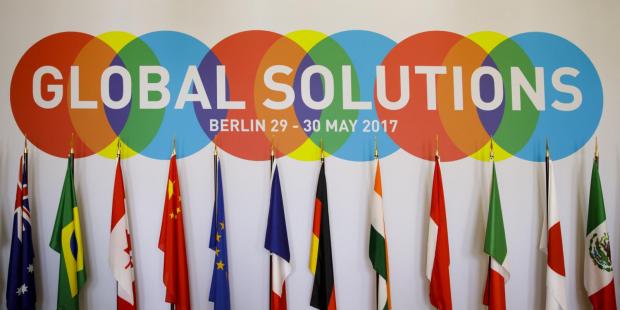